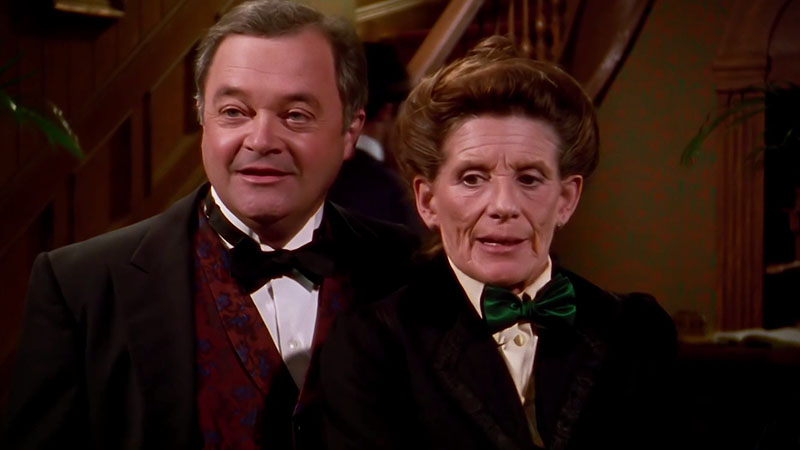 Hetty challenges Carmody to a contest between the two schools to determine the fate of the Avonlea schoolhouse.

Synopsis: Hetty is notified that she will have to teach in Carmody or she will be forced to retire. In retaliation, Hetty challenges Carmody to a contest between the two schools to determine the fate of the Avonlea schoolhouse. Simon and Hetty become engaged, but the possibility of losing the hotel and the schoolhouse puts a strain on their relationship.

A potential investor criticizes the White Sands Hotel for being out of date. Simon seems to relate to the condition of the hotel and feels like he's over the hill. Matters grow worse when the Deputy minister of Education, Mr. Turnbridge, informs Hetty that the schoolhouse will be closed and that she must be transferred to Carmody or retire.

Despite the problems, Simon and Hetty become engaged and the King family hold an engagement party.  Clive awkwardly tries to applaud Hetty for turning down the position in Carmody but his reference to younger teachers only acts to infuriate her and the party ends early.

Hetty requests a challenge between the Avonlea and Carmody students in an arrangement where if Avonlea wins, the schoolhouse will remain open. The Avonlea children win the contest, but when the Carmody principal accuses Hetty of cheating, Avonlea is disqualified.

Hetty is devastated and calls off her engagement with Simon. In a great scene, Hetty is locked in her room and she and Simon are pushing the engagement ring back and forth underneath her door.

Davy and Dora visit Turnbridge and try to convince him that Hetty didn't cheat. When Turnbridge reviews the exams, he suspects that the Carmody principalle tampered with the answers. Avonlea is declared the winner and the schoolhouse is allowed to stay open.

Simon decides not to sell the White Sands. The theme in many ways is similar to the theme in Home Movie. Both Simon and Hetty are highly conventional and defiant to change. Their methods are considered outdated and they are forced to adapt to the changing times or be replaced in their professions.

Reluctantly, they are able to persevere and retain their positions. In the end, were left with the following impression: Simon and Hetty are already married; Simon to the hotel, and Hetty to her teaching.

Stock footage of Countess Polenska riding toward the hotel is shown at the beginning of this episode. Noooo!!! She's back!!!

Turnbridge questioning Davy and Dora on subjects they were only specifically tutored on with Hetty (Davy with english and Dora with math) was a bit unbelievable.

If Dora is a genius with numbers, then how come she is having trouble with long division?

Doesn't Clive know how to ruin an engagement party?

Could Davy have really become that good in english in only two years?

"Take it from me Hetty. When your heart skips a beat it's not love, it's indigestion." -Rachel Lynde

Simon talking about how in love he is with the walls of his hotel.