Episode 2.9: All That Glitters 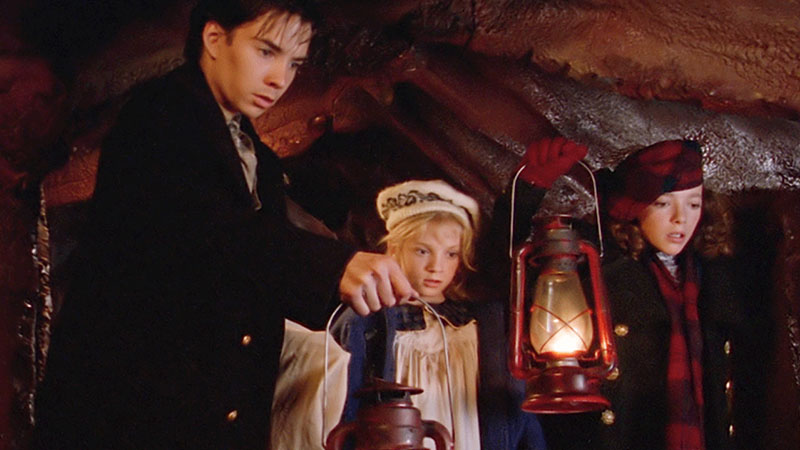 A villainous sea captain arrives in town looking for one half of a treasure map held by his nemesis Ezekiel Crane.

Hetty is certain that the treasure is buried on King property and begins a fierce rivalry with Janet over the rights to the bounty.  The rivalry between Hetty and Janet is well played out over the treasure, exhibiting the greediness in Hetty's character.

This story is paralleled with the more serious Crane and Borden rivalry, in which Borden is willing to kill anyone in his path for the real treasure.  Apparently, Borden and Crane had been searching for this treasure for many years.

Borden stabbed Crane and the map was torn in half during their struggle. Hetty and Janet also tear their map in half while feuding over the treasure that Hetty claims is buried on King property.

In a hilarious scene, Alec informs the two women that the map was used for placing the King well. The greediness expressed by the King women, Crane and Borden is contrasted with Gus's meek nature. When asked what he would do with the treasure, Gus simply replies that he would buy a home.

The rivalry between Crane and Borden ends in a sea cave, where Borden threatens the lives of Felicity, Gus and Sara. After a struggle, Borden pushes Crane down a crevice and into the cave's depths.

Gus eventually realizes that Crane not only survived the fall, but also tricked Borden out of the real treasure. Crane leaves the island, but not before giving Gus his home at the lighthouse and a ruby red ring, which will prove significant as the series progresses.

Ezekiel Crane's cry when he falls into the cave's dark crevice is about as excessively phony as the bleached skull in the cave. It looks like they dragged the skull out of a biology class!

The ending was predictable and it's unlikely that the shifty Captain Borden would have fallen for Crane's scheme for long. It's most likely that he would have returned to the island to seek revenge and Gus would have been the first person he questioned about the whereabouts of Crane.

If Borden did return, it was never mentioned in the series.

If Ezekiel's the one who wants the treasure, then why is Gus doing all the digging and putting his neck on the line sneaking into Borden's room?

If Ezekiel said he came to the island to keep an eye on Gus, then why is he saying he came because of the treasure in this episode? Does this guy keep getting shadier or what?

"Maybe get me ah home. Someplace where I wouldn't get thrown out of of." -Gus Pike (about what he would do with the treasure)

"I don't find this particularly funny! I wanted to find some treasure!" -Felicity King

(1) Between takes during the shooting of 'Road to Avonlea,' Michael York penned his autobiography, 'Accidentally on Purpose,' which was published in 1992 (The British release was entitled 'Travelling Player.')

(2) This episode marks the last appearance of Ezekiel Crane. He will still have a profound influence on Gus's life and is mentioned again in the episodes 'The Return of Gus Pike' and 'Homecoming.'

(3) Reverand Leonard and Rachel Lynde find a bible in the church cellar containing names, birth dates and marriages of the first pioneers, who arrived from Scotland to christen the town of Avonlea.

(4) Captain Borden is the second person to call Ezekiel Crane a 'sea ghost.' Sara was the first to use the term when she suggested to Felix that Crane was a 'sea ghost' risen from the deep in the previous episode.

(5) The Globe and Mail visited Michael York on the set in January 1991 and reported the following:

He clumps down the steep stairway in rubber boots, his hair long and scraggly. His thick navy sweater, under a leather jerkin, badly needs washing. Old socks are clothes-pinned to the rope rail, drying in the cramped lighthouse. There are cobwebs over the cupboard next to the unmade bed. The lantern in his gloved hands casts gloomy shadows in his unkempt bushy sideburns. The rest of his face is unshaven.

Can that grumbling old man really be Michael York? The bright blue eyes are still those of Pip in Great Expectations, of Liza Minnelli's co-star in Cabaret. But in two episodes of The Road to Avonlea (Sunday, CBC at 7 p.m. and Jan. 20), York plays a scary, scruffy sea captain. Why would the swashbuckling hero of The Three Musketeers disguise himself so drastically?

Between takes on the Toronto studio set, York laughs gently. "I wanted to do something my two grandchildren could see.

The ending was too predictable. The greedy rivalry between Hetty and Janet was funny. Gus's acquisition of the lighthouse and the ring was great for setting up future stories.