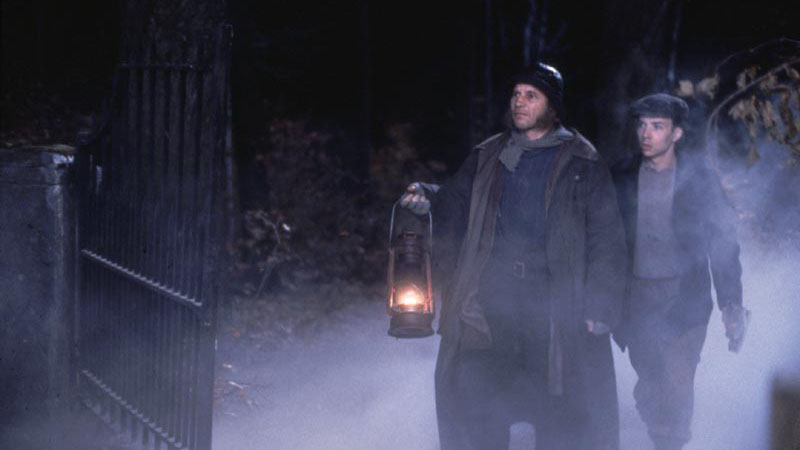 Captain Crane offers Gus work and introduces him to his father, who recently broke out of prison.

Sara exhibits her overactive imagination when she tells Felix that Crane is really a 'Sea Ghost,' risen from the deep.  Crane asks Gus to work for him on his boat and later discovers that the Captain is harboring his villainous father, Abe Pike, who recently broke out of prison.

Ezekiel tells Gus that he loved his mother Eliza, and that she wasn't fit for Abraham Pike. Ezekiel further explains that he promised Eliza Pike, on her deathbed, that he would help Abe and keep an eye on Gus.

Abe steals Janet King's wedding ring and gives it to Gus, claiming that it was his mother's ring. When Hetty discovers that Gus is in possession of the stolen ring, the town reacts in an uproar, claiming that Gus is a member of a rum running ring in Avonlea.

Crane prevents Abe from taking Gus with him, which creates a heated conflict between the two men. A battle ensues atop the lighthouse between Ezekiel and Abe Pike, which results in Abe plummeting to the rocky shore.

Afterwards, Sara comments to Gus that she hopes his "father's ghost can rest in peace now and doesn't come back to haunt" him. This statement ensures that the villainous character will return sometime in the future.

The use of island legends and myths are well expressed in this episode and integrated well with the grim reality of Gus's life. Abe Pike emerges as probably the most hated bad guy in the series. The story line featuring the relationship between Gus and his villainous father is similiar to the relationship between Huckleberry Finn and his father in the Mark Twain classic.

Just what Sound does Ezekiel say Gus is from?

"A ghostly galleon shimmering in the midst!" -Sara Stanley

"Don't play meek little mouse with me girl. I know perfectly well you were the ringleader" -Hetty (to Sara)

"A little knowledge is a dangerous thing." -Rachel Lynde

"Aye, that's the way with treasure. Whoever finds her, claims her." -Ezekiel Crane

(1) Michael York, who plays Captain Ezekiel Crane, has appeared in many notable movies including Caberet (1972), Logan's Run (1976), The Three Muskateers (1973), and Austin Powers: International Man of Mystery. Born in Fulmer, England, May 27, 1942, York attended the Oxford University Dramatic Society, performed at the Laurence Olivier National Theater Company, and would eventually receive the Officer Order of the British Empire in 1996.

(2) In an article by Lance Erickson Ghulam, York described how he enjoyed playing the mysterious lighthouse keeper: "Basically Captain Crane had a broken heart which he hid under his rough exterior. He was meant to be scary; in other words, he was fun to play!" (Avonlea Traditions Chronicle; Winter 1996/7; issue No. 18; page 4)

(3) The tune Gus plays, She's Like a Swallow, is a Canadian tune that originated on the coast of eastern Canada and possibly Newfoundland. According to composer John Welsman:

"Captain Crane's theme... was the song Gus Pike's mother sang to him as (a) young boy. It was natural that the piece that haunted Crane would be orchestrated as score for the episode. My partner, Cherie Camp, and I had produced a recording of the song a number of years ago, and I decided to include it on the soundtrack CD."

The Road to Avonlea Original Soundtrack was a special feature released with the series Complete Sixth Volume DVD set. You can read the lyrics and hear the performance at Auntie Janet's Rose Garden in the 'An Avonlea Musicale' section.

(4) According to Eliza Pike's gravestone, Eliza lived from 1863-1894. Both Eliza and Ruth Stanley allegedly died during the same year, but Eliza's death will become an issue again in The Return of Gus Pike.

(5) "The Sea Ghost, like many of the episodes for the series's second season, examines the darker side of emotional relationships," Sullivan told the Globe and Mail in January 1991. The first season prompted requests from viewers who wanted to get married on the set of Avonlea's sunny world. "The series has matured. Everything about this season is sharper and more faceted."

The episode reveals important insight into Gus's background. The inclusion of a 'treasure island' style story line provides a new adventurous dimension of excitement to the series, culminating in the lighthouse battle to end the episode.