Episode 2.2: How Kissing Was Discovered 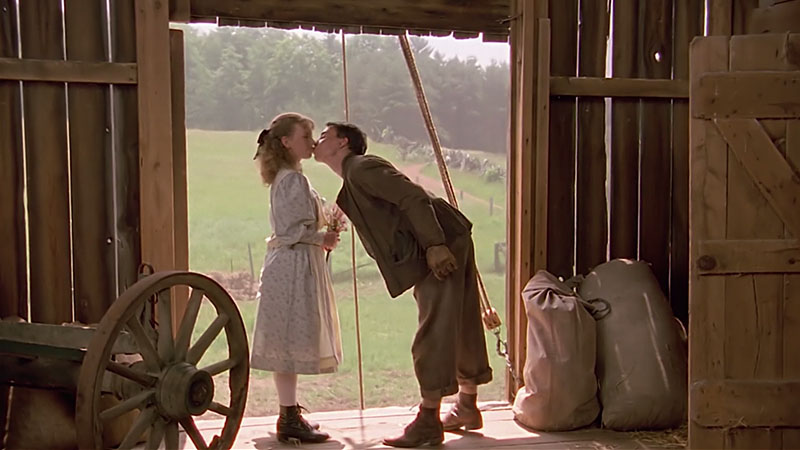 Felicity gets into trouble with Alec after seeking the attention of a young cricket player.

Felicity is coming of age and seeks her first kiss. She becomes infatuated with the cricket player David Hawes. Great Aunt Eliza visits King Farm and quickly becomes a nuisance for Alec, with her sharp biting criticism and constant demands.

Felix and Sara encounter a young sailor named Gus Pike, who arrived in Avonlea after his droller went down in Nova Scotia. During the cricket match, Felicity hilariously roots for the young Hawes, who competes against her father's North Shore team.

With the help of the young sailor Gus Pike, Felicity defies her father's orders by going to a ball in search of Hawes. The night does not go as Felicity plans, as she finds Hawes preoccupied by another young lady. To make matters worse, Alec discovers her scheme and arrives at the ball to take her back to King Farm.

The next morning, Felicity is still fretting about not having her first kiss. To her surprise, she is kissed by Gus Pike in the King Farm hayloft. This begins the Gus and Felicity romance that would become the main story line of the series. It also marks a departure away from the emphasis on Sara Stanley. The introduction of Gus Pike was significant in establishing Road to Avonlea as a dynamic series.

Just what Sound did Gus say he was from?

"She was a lovely baby. It's strange what happens to children when they grow up." -Aunt Eliza (on Felicity)

"Cricket is simply ripping! Watching it is my most favorite past time!" -Felicity King

"Thank you Gus. Beneath your vagabond clothing beats the heart of a gentleman." -Felicity King

(1) The Gus Pike character was derived from L.M. Montgomery's short story "Each In His Own Tongue" from Chronicles of Avonlea.

(2) Michael Mahonen makes his first appearance as Gus Pike. Michael was featured in the mini-series Conspiracy of Silence (1991), playing Lee Colgan, which earned him a 1993 Gemini award for 'Best Performance by an Actor in a Leading Role in a Dramatic Program or Mini-Series.' The mini-series was co-written by Suzette Couture, who also wrote the current episode.

(3) Felicity says that she is 13 and three-quarters. According to an entry in her diary, the month that this episode took place was in June. This would suggest that her birthday is in either September or October and that she was born in 1890.

(4) Gus Pike's age is mentioned in the Bantam storybook for A Dark and Stormy Night.Writer Gail Hamilton remarks that Gus was "Not seventeen" when he first arrived in Avonlea, suggesting that he was sixteen. (Information courtesy of 'Mickey Vision').

(5) As far as the ages of the actors are concerned, Michael Mahonen is a little over 12 years older than Gema Zamprogna. At the time of this airing, Michael was 27 years old and Gema was 14. According to a comment by Kitty Hadley during AvCon 2007, Michael was aware of the sensitivity concerning the age difference and was careful only to kiss Gema on the cheek during this scene.

(6) 'How Kissing Was Discovered' was the title of chapter 18 of Montgomery's The Story Girl. Sara tells a mythic story about the origins of kissing after Felicity claims that Peter tried to kiss her. "I made his ears tingle all right. I boxed them both good and hard," Felicity fumes. "As if I would let a hired boy kiss me!"

(7) Hetty and Olivia do not appear in this episode.

The arrival of Gus Pike and the early spark of his relationship with Felicity sets up the main story line that would define the series.