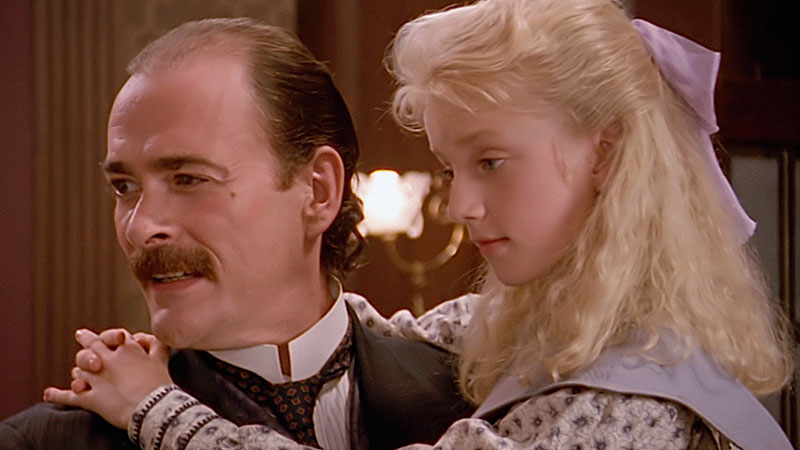 Peter invites Sara to a carnival where she meets a fortune teller, who claims to reunite the Story Girl with her father.

The opening episode of season two begins where the last season left off--with the question of Sara's residence at stake. Felix's pranks get Sara in trouble when fireworks are ignited at the General Store and Sara is blamed.  Alec becomes angry with his niece, which could be redirected anger from the shame of his gambling ambitions.

Sara receives a letter from her father, who wants her to return to Montreal. Blair Stanley dies in a tragic accident at Stanley imports and a conflict between Hetty and Louisa Banks is rekindled in a dispute over Sara's guardianship. Sara's stoic behavior indicates her inability to accept her father's death. Olivia notices this behavior and remarks, "I just wish she would have a darn good cry. It seemes unnatural."

Peter invites Sara to a carnival where she meets a fortune teller, Isis, who claims to reunite the Story Girl with her father.  When Isis supposably evokes the spirit of Blair Stanley, Sara is eager to believe that her father has returned.

Sara learns that Isis and her partner in crime Leo are con artists and stumbles upon their scheme. The carnies kidnap Sara and hold her for ransom, which sets up a heroic rescue by Alec King.

The wimpification of Peter Craig continues (see Conversions), when Peter lets out a whiney "Saraaa," after the story girl enters the fortune tellers wagon. Peter was obviously too scared and wimpy to do much else. Talk about burying the character.

What type of explosives was Sara throwing at Leo? Didn't It look like pieces of flimsy Styrofoam?

Considering the heated rivalry that existed between Blair and Hetty, how odd is it to see Blair's open casket in the lounge of Rose Cottage?

"I hope that you'll like your room. It's small, but I think you'll find it an improvement on the chicken coup you once offered me." -Louisa Banks

"How can anyone but a fool lock herself in an outhouse?" -Hetty King

"I know what is on your mind Hetty King. It will take more than wheat cakes to get around me." -Louisa Banks.

(1) The aftermath of Blair Stanley's funeral was shown briefly with Sara standing alongside Louisa Banks in the graveyard. The funeral aftermath was further described in the Bantam Skylark storybook for this episode (12, pages 50-52), written by Heather Conkie. When the ceremony ended and Blair's funeral cart was pulling away, "six circus carts appeared against the horizon, their garish colors making a striking contrast against the leaden sky..." This was a clever description, symbolic of the foreboding events to come. A close-up picture of the tombstone intended for the funeral scene can be seen in the 'Avonlea Sets' section of the 'Our Avonlea' website.

(2) Louisa promises to return to Rose Cottage if the outhouse, among other facilities, is updated. It's funny to note that Hetty never updates this facility. Considering the womens' rivalry, it's not surprising.

(3) The fireworks at the beginning of this episode were meant for the Dominion Day celebration. Dominion Day was a holiday that celebrated the British North America Act and the creation of the Canadian federal government on July 1, 1867, which proclaimed, "one Dominion under the name of Canada." Dominion Day was officially changed to Canada Day on October 27, 1982.

The rivalry between Hetty and Louisa is rekindled and the question of Sara's guardianship is answered. This episode provides many entertaining moments and a thrilling conclusion.