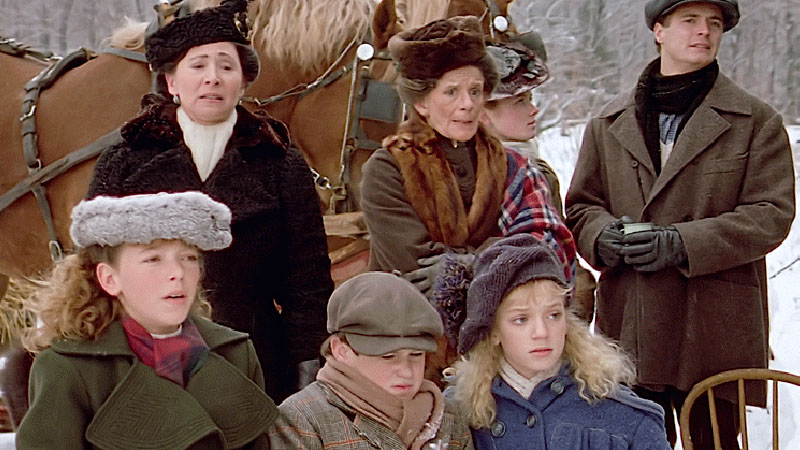 When Archie Gillis sets height standards for the Avonlea Avengers, Alec retaliates by forming his own team, the Misfits, and challenges Archie to a game.

Many of the villagers become upset when the sawmill owner, Archie Gillis, begins to strip cut timber within a mile of Avonlea. Peg Bowen, in particular, becomes hostile when Archie nearly knocks down her house.

Archie causes further trouble as coach of the Avonlea Avengers. He begins setting height standards (determined by the height of his own son, Rupert), which excludes many of the other children. In retaliation, Alec starts his own team, called the Misfits.

Peg Bowen stuns Archie when she pretends to be a man and scores a point against the Avengers in practice. She makes a wager with Archie that if the Misfits win, then strip cutting would cease anywhere near her house.

Hetty disapproves of Alec's Misfits, but reluctantly agrees to support the team once she realizes that the King family name is at stake. When Alec falls and hurts his back, Hetty panics and begs Muriel to take Alec's place as coach. Muriel agrees to replace Alec as long as Hetty accepts the intramural sports program.

At King farm, Janet goes into labor, which causes Felicity to faint. Sara, who has been begging to play throughout the episode, scores against the Avengers. Muriel Stacey's Charlottetown Women's team shows up and takes to the ice. Peg Bowen scores the final point and the Misfits defeat the Avengers.

The misfits rush to King farm when they hear that Janet has gone into labor. When they arrive, Janet has given birth to a boy, Daniel King.

As most Avonlea fans have noticed since this episode first aired, there is no explanation why Andrew is in this episode. While he's probably just visiting, there has never been any explanation for his appearance. Andrew left with his father, Roger, at the end of Family Rivalry.

Sara tells Janet King that "she's the best" mother. However, it was clearly shown in the previous episode, A Mother's Love, that Hetty King was 'Mother of the Year' and deserves the title of best mother.

Why is it that Archie won't let the Kings play on the Avengers team, and yet the competition is held on Rushdon Pond, a pond where the Kings have water rights?

Isn't it funny how Cecily is picked before Sara?

Peg Bowen tells Sara, "there's a lot more resting on your horizons Sara Stanley than a hockey game." Isn't it too bad this prediction wasn't true for the series?

Did you notice how most of the Avonlea students voted twice?

"Competitive sports! It's not enough I have that Stacey woman breathing down my neck in my own classroom, promoting the most uncivilized behavior among children I have ever witnessed." -Hetty King

"They don't want me on the team anyway. They're all being so horrible. Everyone said such mean things." -Sara Stanley

(1) In the Harper Collins book for this episode, written by Linda Zwicker, it's mentioned that Hetty had another "boyfriend" besides Romney Penhallow and that Muriel Stacey stole him away. The writer of the current episode wisely did not include this relationship, being that it's an obvious rehashing of the rivalry between Rachel Lynde and Hetty, it's unnecessary because Hetty and Muriel already have an occupational rivalry, and perhaps more importantly, it would act to degrade the importance of Romney Penhallow.

(2) The Misfits defeated the Avengers 3-2. Sara scored the first point, Andrew the second, and Peg Bowen scored the final point to give the Misfits the victory.

(3) Dr. Blair tells Janet King that it's been nine years since she had her last baby. This episode takes place in winter 1904-1905, which means that Cecily King was most likely born sometime in the years between 1895-1896.

(4) Reverand Leonard gambles on the Misfits and ends up winning enough for the church roof. As we'll discover in later episodes, the church roof is not paid for and the reverand disappears. It makes you wonder what Leonard did with the money?

The triumph of the Misfits at the hockey competition and the birth of Daniel King is a great final to perhaps Avonlea's greatest season!