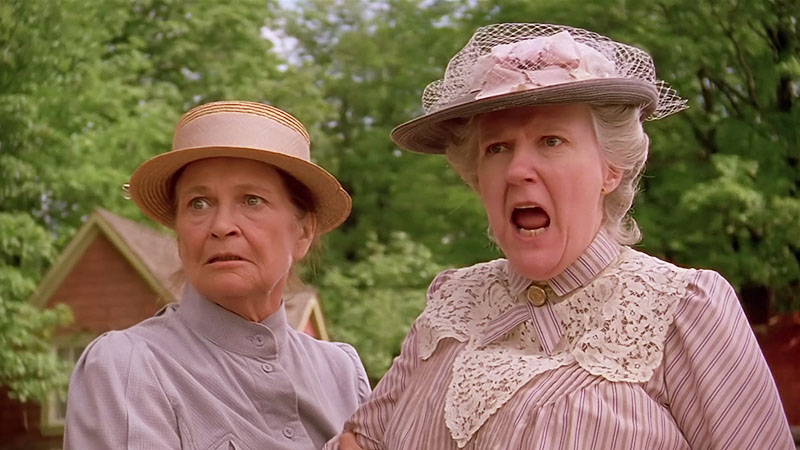 Davey's troublesome behavior, along with a nagging toothache, becomes too much for Rachel Lynde to bare.

Marilla and Rachel attend the funeral of Marilla's blood relative, Mary Keith. They learn that Mary's two children, Davey and Dora Keith are homeless. Racked with guilt, Marilla decides to take responsibility of the children after Mrs. Wiggins fails to accept Davey at the orphanage.

Davey's mischievous nature gets him into trouble as he begins to wreak terror at Green Gables. His terrible deeds include tying Mrs. Lynde's shoe laces together, breaking a mirror, and putting Rachel's corset on a pig.

If Davey weren't enough, Rachel is troubled by a toothache and is certain that her death is inevitable. Faced with the possibility of losing her life-long friend and eleviated by having her tooth pulled, Rachel softens and decides to accept Davey at Green Gables.

Davey's deeds are viewed as misunderstandings, rather than intentionally planned evil schemes. Rachel's one liners and interactions with Marilla and the Keith twins are hilarious. Marilla plays the straight person to Rachel's constant criticism and observations.

In the scene after Davey breaks the mirror, a boom mike can be seen hovering in the left hand corner of the screen. This occurs after Rachel says "seven years bad luck" and Marilla replies "Now don't stuff his head..."

Wasn't Rachel's aching tooth similiar to the fable of the lion with the thorn in his side?

"I wouldn't be surprised to see that boy barking at the moon!" -Rachel Lynde

"I'll be so good, you're not even going to know it's me." -Davey Keith

"Plain pine caskets are a disgrace, that's what. A body would get slivers just laying in it. If you ask my opinion, it's a shameful way to meet your maker." -Rachel Lynde

(1) The arrival of the Keith twins at Green Gables is featured in Anne of Avonlea Chapter VIII, 'Marilla adopts twins.' The infamous pig is alluded to in this chapter with Dora on the receiving end of one of Davy's mischevous stints:

"Davy made me walk the pigpen fence," wailed Dora. "I didn't want to but he called me a fraid-cat. And I fell off into the pigpen and my dress got all dirty and the pig runned right over me. My dress was just awful but Davy said if I'd stand under the pump he'd wash it clean, and I did and he pumped water all over me but my dress ain't a bit cleaner and my pretty sash and shoes is all spoiled."

(2) Ashley Muscroft, who played Dora Keith, had several insightful memories of this episode: The scene where Davey ties Rachel Lynde's shoes together took a long time to get right due to laughing; Ashley and Kyle Labine (Davey Keith) kept "screwing up" the corseted pig scene because they couldn't stop laughing; Kyle actually hated the frog and Ashley was terrified of the frog during the funeral scene; Colleen swinging Ashley around was not in the script, but they put the footage in the episode; Ashley and Kyle were allergic to hay and couldn't stop sneezing during the hay loft scene.

(3) The barn scene where Davy climbs up a ladder to find his mother in heaven was similar to one of Montgomery's own personal experiences. While attending a church service, Montgomery inquired where her deceased mother was.  Her Aunt pointed up and Montgomery, seeing a trap door in the church ceiling, asked why they couldn't climb the ladder and reunite with her mother.

Rachel Lynde steals the show again, while Davey and Dora bring some youth back to Green Gables.