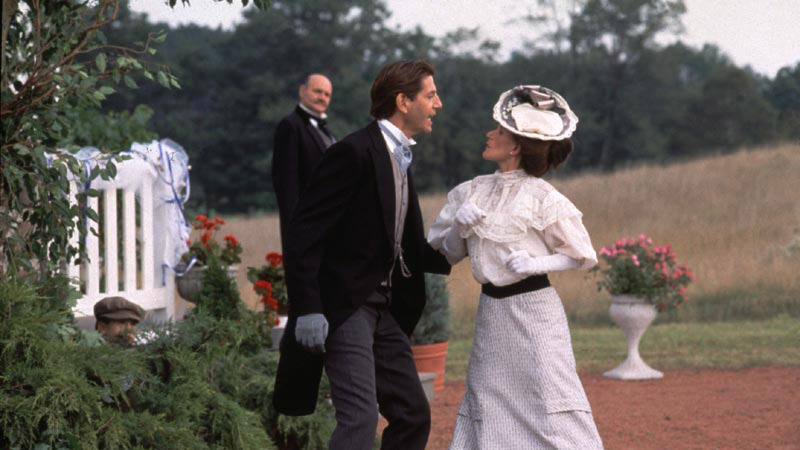 Romney Penhallow returns for his nephew's wedding and attends a reception at King Farm. Hetty refuses to greet her former sweetheart and famous artist, due to an alleged act of betrayal that occurred at a Christmas party 36 years ago.  Apparently, Romney invited Rachel Lynde to the party to make Hetty jealous; but the plan misfired when Hetty swore that she would never speak to either one of them again.

In a memorable scene, Hetty falls into a pond while being pursued by Romney. Romney rushes to her aid, but is pushed into the water by a humiliated Hetty (Recall how this instance is somewhat similar to the mention of how Blair Stanley once saved Ruth after she fell into the pond?).  Hetty and Romney renew a competitive rivalry but soon learn to enjoy each others company once again.

The father of the bride, Nathaniel Hardy, pulls his advertisements from the Avonlea Chronicle, which forces Mr. Tyler to shut down the paper. Olivia continues to show her outspoken independence from Hetty by confronting Mr. Hardy and convinces the businessman to resume his advertising with the Chronicle.

Romney explains that he experienced tremendous grief when leaving the island and abandoning his father when he was sick. Hetty soon learns that Romney experienced heart failure and was ushered from the island. A few days later, Hetty and Rachel discover that Romney had passed away.

Hetty expresses a more emotional and personal side of her personality in this episode, while not losing the strict and defiant aspects of her character. Olivia reveals a forceful ambitious side while never failing to show her humbleness to Sara in her expressions of relief.

Wasn't the "Just Married" sign on the back of the automobile ironic when Romney and Hetty were driving to the coast?

"The true fool is someone who never takes a risk." -Olivia King

Rachel: Thomas and I, always made it a point to settle our differences before going to bed at night.
Hetty: Poor man must have died from lack of sleep.

(1) This story is adapted from Montgomery's Chronicles of Avonlea chapter 5, 'The Winning of Lucinda.' The story still surrounds the wedding of Alice Penhallow and includes Romney and Nathaniel. The main difference is that Romney's big non-speaking quarrel was with Lucinda instead of Hetty, and it lasted for 15 years, not 35.

(2) Peter Coyote was nominated for an Emmy award for 'Outstanding Guest Actor in a Drama Series' for his portrayal of Romney Penhallow.

(3) Rachel mentions that Marilla is visiting Anne. Hetty is sort of assuming the role of Marilla in her jesting toward Rachel.

(4) 1868 was the year of the infamous Christmas ball when Rachel allegedly stole Romney away from Hetty.

This episode reveals a personal side to Hetty not often seen, while Olivia's strong willed side is also emphasized.