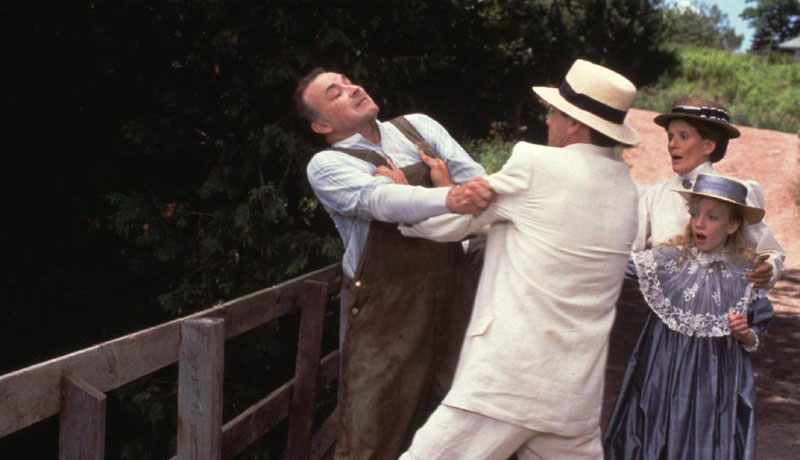 A long-term feud between Alec and Roger King is re-ignited over distribution of the King family savings.

Alec offers to co-sign for Amos Spry's mortgage while Amos recovers from misfortune (This is particularly interesting, considering it was Amos that made the shady deal with Judson Parker in Felicity's Challenge, which consequently resulted in Felicity losing the harvest ball costume contest to Jane Spry).

Roger King, a successful geologist and sibling to Alec and Hetty, returns from his studies in Brazil to visit King Farm and take his son Andrew with him. Hetty displays a sickening adoration for Roger with titles such as "conquering hero" and "world famous geologist."

The tension between the brothers, Alec and Roger, becomes evident when Roger expresses his animosity against Alec always trying to be his "big brother." Roger harbors anger for being dropped as a baby, which left him with a bad leg and a limp.

A rivalry also exists between their sons, where Felix and Andrew quarrel over Grandfather King's fishing basket. Roger insists on helping Alec adopt more efficient farming techniques and encourages Hetty to purchase a milking machine. When Roger and Hetty discover that Alec used the King trust fund to cover Amos Spry's mortgage, a heated debate erupts within the King family.

The conflict culminates with a fight between the sons and the fathers, which results in Roger shoving Alec over a bridge into the water (which makes him the second King to be dunked under a bridge in one season). The near drowning of Alec King brings reconciliation between the brothers and eventually between Andrew and Felix.

In the end, Amos pays back Alec's loan, Andrew gives Felix the basket, and Roger decides to take Andrew with him after accepting to take a position at Dalhousie University in the fall.

Wasn't it funny how Hetty kept all of Roger's grade reports?

Wasn't it ironic that the company name of the dysfunctional milking machines was "MacRae?"

Would Alec have been so kind to Amos had he known the shady deal Amos made in 'Felicity's Challenge' with Judson Parker, which caused Felicity to lose the Harvest Ball costume contest?

"You stuck up little Hetty's pet!" -Felix King (to Andrew)

"Everyone's going to think this was my idea." -Hetty (bragging about Roger's reception).

(1) In The Story Girl, Uncle Roger lived with Olivia in a house which was simply called 'Roger's house,' and was located not far from Alec's house. Roger King was described as a confirmed bachelor who was "quite jolly" and "fond of teasing (Chapter 4)." This is clearly a strong contrast from the serious Roger King in this episode.

(2) Hetty King, Andrew King and the name 'Rose Cottage' did not exist in the Montgomery literature.

(3) In the HarperCollins book for this episode, written by Gail Hamilton, it's mentioned that Andrew is almost 14 years old. This would mean that Andrew and Felicity are very close to the same age.

(4) Andrew King (Joel Blake) was written out of the series in this episode (although he appears once more in the episode 'Misfits and Miracles' without any explanation). Joel had no desire to continue acting and wanted to pursue his interests in his studies, sports and social life (he was in junior high school at the time).

(5) In the summer 97' edition of the Avonlea Traditions Chronicle, Joel commented about the mischief that he and fellow cast mate Zach Bennet (Felix King) got into on the set:

"One time we were filming in Uxbridge. There's a pond there, and it was full of salamanders. Zach Bennett and I got a bucket full of them and put them in the sink of our trailer."

Apparently, their co-stars were not pleased to find the salamanders in their sink and Joel and Zach had to return the amphibians to the pond.

The parallel of the conflict between the fathers and sons is well presented.