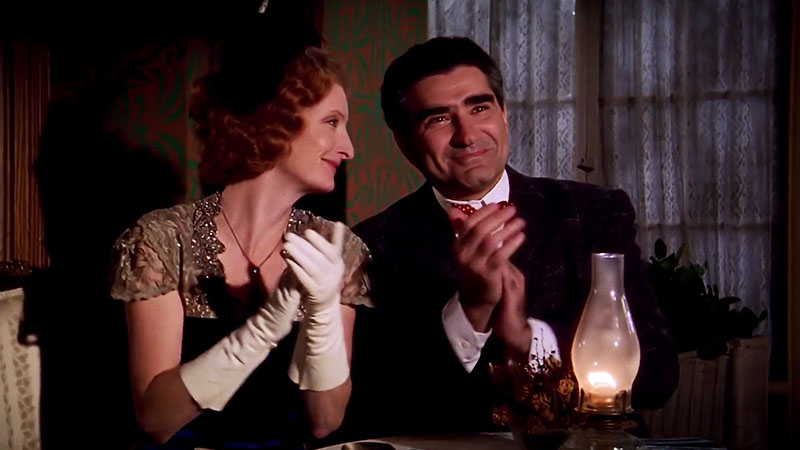 When a song writing duo overhears Alec's singing, they give him an offer to join them on broadway.

The song writing duo of Rudy and Betty Blaine visit Avonlea in order to overcome a creative slump. Hetty becomes convinced that the Blaines are 'in' with the royal crowd after hearing a bogus story about their friendship with King George.  The Daughters of the Dominion host a musicale and the Blaine agree to perform.

Selena Dale visits Golden Milestone and is able to put together a sound replicator device that Jasper has sent from Cambridge. Felix feels that he can market the device and records Alec's singing voice for the purpose of demonstration. He shows the device to the Blaines, but Rudy is more interested in Alec's voice than the device.

While caught in a creative slump of only playing songs in 'C,' Rudy is inspired by Alec's voice and asks him to join them for a Broadway musical performance. Alec is once again split between his responsibilities to King farm and his ambitions to seek adventure outside the island.

Selena manages to build a device from Jasper's schematics that converts the 'C' notes to 'G' notes in an effort to help Rudy's song writing. During the musicale, Rudy is pleasantly surprised to play his songs in 'G.'

Alec decides not to play with the Blaines, and instead, asks Cecily to join him on stage for a song. Rudy shakes the slump and Alec decides to stay in Avonlea.

Simon expresses his concern for the reputation of his hotel when the Blaines arrive. It's interesting to note that he wasn't as concerned about his hotel's reputation in What A Tangled Web We Weave when he was pretending to be a busboy.

Hetty has another 'out of character' experience when she states that "show people are practically royalty." The Hetty from the first few seasons fiercely criticized show people, especially in It's Just A Stage.

How many times is Hetty going to fall for the bogus royalty rumors? You'd think she would have learned her lesson after the ridiculous Heath Hymus incident from Fools and Kings. In a ridiculous scene, Hetty confronts Alec in a giddy school girl manner and nearly works herself into a frenzy to support the musicale. It was really appropriate that she was riding Sara's bike because she wasn't acting her age.

Olivia tells the Blaines that they don't have murders in Avonlea, and yet her first big story for the Chronicle featured a murder in The Hope Chest of Arabella King.

The writer of this episode, Hart Hanson, clearly does not understand Hetty's character or Road to Avonlea in general.  Hanson's constant mischaracterizations and mistakes makes me wonder if he has even seen the series before.

How did Selena make the jump from clumsy acupuncturist to sophisticated scientific genius?

Just what was Clara Potts doing on stage and why were people approving?

Why didn't Rudy just play his tunes in 'G' in the first place?

"Maybe you should take us to some friendly country like Borneo. Their only head hunters." -Rudy Blaine

"Felix, I'm your father, not your client." -Alec King

"Times like these make one realize the mixed blessings of going deaf." -Eliza Ward

(1) Eugene Levy (aka Rudy Blaine) is a versatile actor, writer, director and producer who played a variety of characters, including Earl Camembert and Bobby Bitman, on the former Canadian comedy show 'SCTV.' Levy has also been featured in the movies 'Splash (1984)' and 'American Pie (1999).'

(2) Jasper is in Cambridge, so there is finally a really good excuse for his absence.