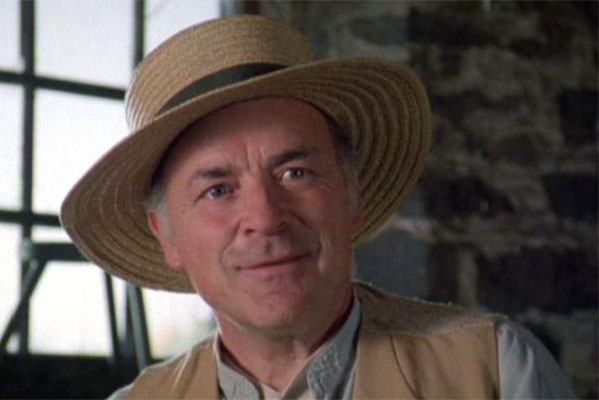 First appearances: 1.1: The Journey Begins
Alec King was born in 1859, the second child and the first son born to Heziah King. When his younger brother Roger suffered an accident, which impaired him from most physical work, Alec was the obvious choice to succeed his father in tending the King farm.

His older sister Hetty, however, would often deal with the King finances. Alec had two younger sisters, Olivia and Ruth; but Ruth would die of consumption. Alec was an accomplished athlete and a member of the Avonlea Avengers.

Alec pursued Janet Ward, but her father refused to allow them to court. Janet's Aunt, Eliza Ward, stood up to the reverend and convinced him otherwise. Alec and Janet were married in 1888.

In 1890, their first daughter, Felicity was born. Alec ran King farm after his father died and they had two more children, Felix and Cecily. Alec was a kind hearted father and would always be willing to help his fellow neighbor.

After an altercation between the two brothers, Alec was nearly drowned. The life threatening experience brought the siblings together and caused them to resolve their conflicts (2.7: Family Rivalry).

Alec would soon start a conflict with the town sawmill owner, Archie Gillis. When Archie began setting height standards for the Avonlea Avengers, Alec started a new team, the Misfits, to challenge his old team. In an upset, the Misfits defeated the Avengers. During the game, Janet went into labor and Daniel King was born (2.13: Misfits and Miracles).

Tragedy would strike when Alec's childhood friend, Emmett Grier, would die in an explosion while offshore fishing. Alec felt tremendous guilt and offered to work the Grier farmland for Emmett's young widow Evelyn.

Overworked and exhausted from working two farms, Alec began to blame himself for Emmett's death. Alec met strong opposition from his family when he suggested that the King family principle be invested on the Grier farm. Evelyn eventually realized that she must build her own life and sold the farm (4.6: Evelyn).

Who Will Run King Farm?

Alec, much like his father before him, expected his oldest son to take over the farm for him when he died. Felix however, had aspirations in business and had no intentions on becoming a farmer.

Alec extended Felix's work at the farm to include fixing the fences, which put strain on Felix's work schedule at the hotel. Felix became exhausted and began neglecting his chores. When Alec threatened to make him quit the hotel, Felix lashed out at his father, telling him that he didn't care about the farm and that he had no intentions of being a farmer.

Felix eventually resigned from the hotel and told Alec that he would dedicate his time to the farm. Seeing Felix's unhappiness, Alec reconsidered and allowed Felix to continue his work at the hotel.

In winter 1909, Cecily contracted tuberculosis and Alec and Janet had to make the difficult decision of sending Cecily to a sanitarium (5.9: Thursdays Child). The following year, Alec and Janet received a phone call from Thornhill Sanitatium, notifying them that Cecily was healthy enough to return to Avonlea (6.13: Homecoming).

Janet's sister Abigail returned from the Yukon in 1911 with her husband Malcolm and her son "Lucky" MacEwen. Cecily overheard Abigail comment that Janet pretended to be sick on her honeymoon so that Alec wouldn't be embarrassed about not affording their honeymoon trip.

Alec planned to use money from a stock certificate on a threshing machine, but when Cecily told him about Abigail's conversation, Alec decided to spend the money on Janet. Alec decided that he was going to buy Janet a ring he believed that she wanted.

After several mishaps and misunderstandings, Alec learned that Janet was not interested in the ring after all. Janet refused to accept Alec's gift, but Alec surprised her with the ring as a reminder of how important she was to her family (7.5: Secrets and Sacrifices).

Alec and Janet faced changes in their family as Felix joined the Navy and Felicity married Gus Pike. Despite all the opportunities available to leave Avonlea, Alec and Janet remained at King farm with their daughter Cecily.

In December 1914, the King family were devastated when they received notice that Felix was missing in action. Janet blamed Alec, claiming that he didn't try to stop Felix from enlisting. Miraculously, Felix eluded death and returned home to celebrate with his relieved family (Happy Christmas Miss King).