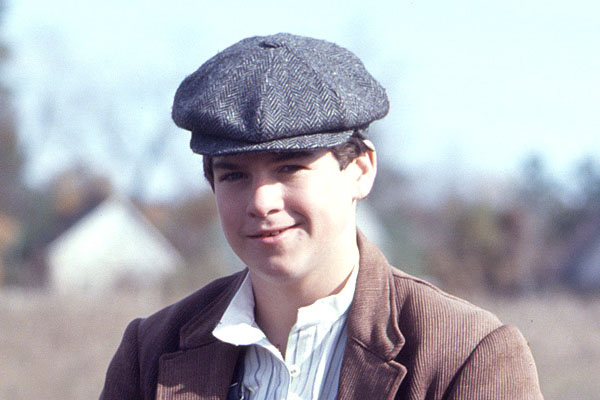 During winter 1903, Felix became fearful of his aunt and teacher, Hetty King, causing him to perform badly during spelling bees. After being forced to wear a dunce cap, he ran away from school.

Felix was found by the reclusive Peg Bowen, otherwise known as 'the Witch of Avonlea.' Peg gave Felix a stone that she claimed had magical powers and would help overcome his fear of Hetty and spell better.

Felix was able to win the island spelling bee, despite the fact that he lost the stone. Shortly after Felix's victory, his mother described him as having "the brains of the Kings and the gumption of the Wards" (1.11: The Witch of Avonlea).

Felix had ambitions of running a successful business, which would often lead to disaster. He started his own delivery service, but was soon faced with tragedy when his horse Blackie died during a race with a rival competitor (3.4: Felix and Blackie).

The following year, Felix would learn another lesson from his recklessness. After being denied a rifle for his birthday, Felix removed his father's rifle and accidentally shot the family dog, Digger (4.3: Incident At Vernon River).

Digger recovered from the tragic incident and Felix learned another lesson. During this time, Felix would become friends with Isolde 'Izzy' Pettibone, who would play an increasingly important role in his life in later years. Another good friend, Gus Pike, was able to find Felix a job working at the White Sands Hotel.

Felix's time spent at the hotel would cause a conflict with his father, who expected him to carry on the tradition of running King farm. Alec extended Felix's work at the farm to include fixing the fences, which put strain on Felix's work schedule at the hotel.

Felix became exhausted and began neglecting his chores. When Alec threatened to make him quit the hotel, Felix lashed out at his father, telling him that he didn't care about the farm and that he had no intentions of being a farmer.

Felix eventually resigned from the hotel and told Alec that he would dedicate his time to the farm. Seeing Felix's unhappiness, Alec reconsidered and allowed Felix to continue his work at the hotel (5.1: Fathers and Sons).

Love May Be Blind...

In 1909, the seeds of a budding relationship were planted between Izzy and Felix when she bid on him at the 1st annual bachelor auction. To her dismay, Janet King outbid her. Later that night, Alec King invited Izzy to King farm for dinner with Felix (6.2: Lonely Hearts).

Felix's continued his pursuit of a successful business when he opened up a fox farm with Izzy as his partner. Felix learned that he needed to replace Izzy with Nat Lester in order to secure a business loan. The arrangement put tremendous strain on his friendship with Izzy.

Felix discovered that Nat was going into business for himself and parted ways with his business partner. With the business in shambles, Izzy helped Felix sell the foxes and they were able to break even (6.7: A Fox Tale).

Felix eventually decided that it was time to take their relationship a step further and attempted to kiss Izzy. Izzy was not prepared for the interaction however, and maintained that she wanted to remain friends.

Donny Lester and Hannah Hubble confronted Izzy with the rumor that Felix kissed her. Izzy reacted angrily and refused to speak with Felix. Felix attempted to win back Izzy's trust during the Dominions Day celebration, but Izzy told him that it "takes deeds" and not "Just words" (7.2: Love May Be Blind, But the Neighbors Ain't).

In 1911, Izzy, who was nearly 16, made plans to live with her Aunt Lilian in Boston. Felix discovered that Lilian was facing financial problems and attempted to warn Izzy. Lilian finally told her niece that her business had failed and that she was too proud to admit the failure to Clive.

Izzy decided not to leave with her Aunt and Lilian departed town soon afterward. Izzy finally forgave for their earlier dispute and they kissed, erasing Felix's white lie (7.4: Woman of Importance).

In summer 1912, Felix was inspired to join the Navy after reading Elbert Werts's brochure Opportunities in Canada for Young Men. Felix made the startling announcement to his family that he would be enlisting in the Navy (7.13: So Dear To My Heart).

In December 1914, Felix and Elbert were fighting on the battlefields of Europe in World War 1. During a battle, the two friends came under heavy fire. The King family were devastated when they received notice that Felix was missing in action.  Miraculously, Felix had eluded death and returned home to celebrate with his family (Happy Christmas Miss King).