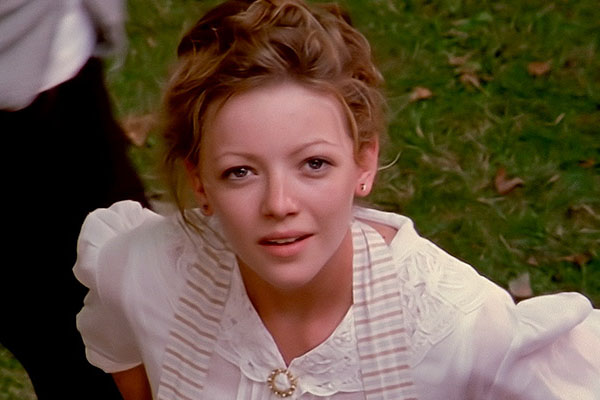 In summer 1903, Felicity's quarrel with Sara Stanley would reach it's peak when the parents were away. Felicity was put in charge and her demands would drive her cousins and siblings to a full blown mutiny. Felicity and Sara temporarily resolved their differences when Felicity cleaned Sara's blue satin slippers, that she subsequently ruined.

Later that fall, the politician Judson Parker tried to buy Alec's vote by offering to reward Felicity with best costume at the harvest ball. In an equally deceptive scheme, Felicity accepted a challenge from Sally Potts and Jane Spry to transform Clemmie into a popular girl at the ball.

When Alec rejected the candidate’s political bribery, Parker changed his decision and awarded the prize for best costume to Jane Spry. Realizing that deception ruins friendships, Felicity reached a reconciliation with Clemmie.

Felicity's life changed when Gus Pike found work as a handyman at King Farm in the summer of 1904. After a failed attempt at romance with the cricket player David Haas, Felicity fretted about her desire to be kissed. To Felicity's surprise, Gus kissed her in the King Farm hayloft (2.2: How Kissing Was Discovered).

Hearts, Flowers and A Heated Rivalry

Gus and Felicity continued to tease their pending relationship, but by the winter of 1906, things began to change. Felicity encouraged her parents to dine at the hotel so that she could arrange a romantic dinner alone with Gus. Alec discovered Felicity's deceptive scheme and scorned his daughter.

Felicity defied her father and attempted to run away from King farm and stay at the lighthouse. Gus explained his respect for Alec and together they returned to King Farm so that Gus could explain that his intentions were honerable. Alec ultimately decided to allow Gus and Felicity to spend time alone together (4.7: The Dinner).

In February 1907, Arthur Pettibone returned to Avonlea (see Arthur Pettibone) and became interested in Felicity. He instantly began a heated rivalry with Gus Pike over who would bring Felicity to the Valentine's Day Dance (4.8: Hearts and Flowers).

After hearing that Arthur was alone with Felicity, Gus began a brawl with him. Gus proposed to Felicity with his ruby red ring that he received from Captain Crane but she refused his proposal, telling him to wait for two years. When Arthur asked Felicity if he could court her, she rejected him in favor of Gus (4.10: Felicity's Perfect Beau).

When Cecily contracted tuberculosis in winter 1908/1909, Felicity went to seek advice from Dr. Jones, who was a leading researcher in studying tuberculosis. Inspired by the fact that Dr. Jones was a woman and interested in pursuing her knowledge of the medical field, Felicity decided to become a doctor (5.9: Thursdays Child).

That same winter, Felicity was accepted to Dalhousie University and Gus was appointed to assistant manager of the hotel. With his increases in wages and status, Gus proposed to Felicity. An argument quickly erupted when Felicity mentioned that she wanted to go to medical college in Halifax, which required her to put aside marriage to achieve her education goals.

Felicity became distraught when Gus told her he wouldn't wait for her to finish school. In fear of losing Gus, Felicity decided to accept Gus's proposal and pursue teachers college in the Spring. Realizing that Felicity would be unhappy if she didn't pursue her career goals, Gus decided to leave for work on the ship 'The Annie Jane' with his fellow mate Matt O'Donnel.  Before Gus departed Avonlea, he offered his ring to her again, but this time with "no strings attached (5.11: Otherwise Engaged)."

While attending medical school in summer 1909, Felicity spotted Gus again and after a brief misunderstanding, they became reacquainted. Soon afterwards, Gus and Felicity met a mysterious woman, who Gus believed might be his mother (see Eliza Pike).

Gus brought the woman to Avonlea and discovered that she had photographs of Eliza's past hidden in a box beneath the pulpit stone. Convinced that the woman was Eliza Pike and that Ezekiel Crane could possibly have been his true father, Gus decided to journey to Jamaica in search of Captain Crane.

Before departing, Gus asked Felicity if she would marry him again. Felicity replied by saying that she would always be his forever (6.1: The Return of Gus Pike).

Out of the Ashes

Several months later, Felicity was devastated to learn that she missed the registration date for her second year of medical school. She accepted a position as assistant to Doctor Snow, but soon became weary of what she considered the doctor's "regressive" practices.

Tragedy struck when Felicity's childhood friend, Colleen Prichard died while giving birth. The experience caused Felicity to decide against returning to medical college (6.12: A Time to Every Purpose). Soon afterwards, Felicity's world came crashing down when she discovered that the ship Gus was on, the Maid of Calais, went down and all hands were lost (6.13: Homecoming).

Felicity grieved from the terrible loss and became withdrawn, often spending hours on the shore hoping that Gus would return. In 1911, Felicity would begin a partnership that would bring her out of her grieving state. She met Stuart McRae, who boarded with the King family in 1911, until he became the town banker.

When Margaret Lloyd died and left her estate in the hands of the town, Stuart called a meeting to determine what to do with the property. After finding several orphans inside the estate, Felicity suggested that the house be converted into a foundling home. Stuart agreed and helped Felicity establish the orphanage in the summer of 1911. Their relationship soon turned into romance when Stuart began to call on Felicity.

Felicity, still haunted by the news of Gus's death, was reluctant to accept Stuart as a suitor. Stuart felt that he was being too forward and attempted to leave Avonlea, but Felicity stopped him at the train station and encouraged him to stay (7.1: Out of the Ashes).

Shortly afterwards, Stuart proposed to Felicity and she eventually accepted his proposal during the Dominion Day's celebration (7.2: Love May Be Blind, But the Neighbors Ain't). Felicity and Stuart began to plan their life together, but a mysterious phone call from South Carolina would change the fate of Felicity's future.

While Felicity was preparing for her wedding with Stuart, she received a call from a nurse in South Carolina. Felicity supspected that Gus was still alive and was trying to contact her. Felicity and Hetty travelled to South Carolina in search of Gus Pike.

While questioning several people about Gus, Felicity finally found a young sailor named Jimmy, who survived the Maid of Calais wreck and knew Gus. Jimmy recalled that Gus refused a lifeboat and heroicly stayed behind to send a signal, in hope that a vessel would rescue them.

Jimmy claimed that Gus drowned, but Felicity was unwilling to give up. Felicity continued her search and found Megget Lydie, who eventually led her to where Gus was located.

Felicity was finally reuntied with Gus, but was devastated when he didn't recognize her and furiously told her to leave. She discovered that Gus was blinded after the wreck and that a troller picked him up while he was barely conscious. Gus told Felicity to get on with her life, but Felicity claimed that she wouldn't return to Avonlea without him (7.11: Return to Me). Gus finally decided to return with Hetty and Felicity, but was distraught when Felicity told him that she was engaged to Stuart McRae.

Gus went to Charlottetown for a surgery that he hoped would restore his eyesight. He survived the surgery but his recovery would be in question. While Felicity believed Gus was unconscious, she asked him to marry her. A perfectly conscious Gus accepted. Finally, after all the obstacles they had overcome, Gus and Felicity were married (7.13: So Dear To My Heart).

In December 1914, Felicity was running the foundling home while Gus was serving as a naval telegrapher in Halifax. Much to her disdain, the foundling home is put up for sale. Felicity informed Cecily that she and Gus would be expecting a baby in 6 months (Happy Christmas Miss King).